Dr. Richard Gentile a board certified Facial Plastic Surgeon and International Aesthetic Technology Expert with offices in Youngstown and Akron Ohio is pleased to announce that we are the first Plastic Surgeon & Aesthetic Skin Care Specialist in Ohio to offer the latest third generation PicoSecond Laser Technology in Ohio and western Pennsylva-nia. The Ferrari of lasers the Quanta Discovery Pico Plus has arrived from Milano offering amazing first in class tech-nology and we are excited to have it in our center.

There are two categories of lasers used in tattoo removal and pigmented lesion treatment: Nanosecond lasers (also called Q-switched) and Picosecond lasers. Nanosecond lasers revolutionized tattoo removal when they were intro-duced in the early 2000’s. Dr Gentile introduced Q-Switched laser technology in our offices in 2003. Nanosecond la-sers pulse a beam of light at a billionth of a second and use a photo thermal mechanism (heat) to break up ink. Pico-second lasers were introduced in 2012. Picosecond lasers pulse a beam of light at a trillionth of a second and they use a photo acoustic mechanism (pressure) to break up ink. Both lasers operate on the same principle; they’re both using laser technology to shatter the targeted ink so that the body can absorb it. The major differences are pulse speed and the mechanism used. The picosecond laser is a revolutionary laser technology due to its much shortened pulse dura-tion. Fact is, Picosecond lasers are the latest generation of tattoo removal technology and pigmented lesion treatment. They operate at a higher speed and generate less heat (they do generate some heat but far less than Nanosecond lasers) which means that they can be operated at a shorter wavelength to break up ink with fewer treatments. Studies show that Picosecond lasers can remove tattoos in half the treatments, even fewer if there are difficult colors in the tattoo. Fewer treatments means lower cost and less discomfort. The Quanta Discovery Plus can treat Tattoos of all colors in addition to being outstanding for treating pigmented lesions such as Melasma and enabling zero down time skin rejuvenation including acne scarring reduction. 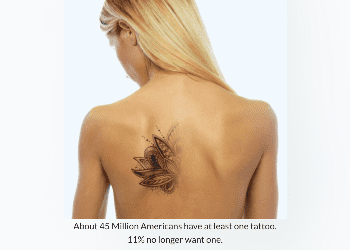 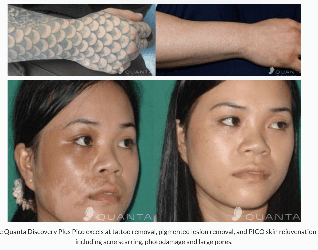 PICO Before and After Gallery